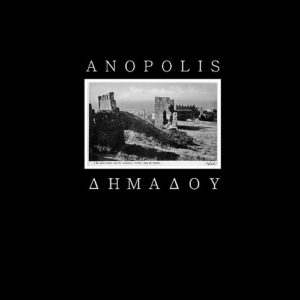 About three years after the group’s second EP on Athens based Lower Parts, Anopolis collective has launched a self-titled label with five new tracks rooted in the essentials of electronic music. In the Greek scene and beyond, Anopolis from Thessaloniki could be called a supergroup with members like Drum Machinee or DimDJ, the latter having recently brought out his first full-length with acid house vibes.

“Δημάδου” (“Dimadou”) offers a variety of sounds across different floor segments. Italo halo is glimmering over the easy-going synth score “Anopolis 19” while percussive theme songs numbered 18 and 20 are bringing to life a Chicago-Sheffield connection with ghetto house and bleep techno.  However, my favourites are (again) on the B-side. Flamboyant “Anopolis 21” leaves all others behind with sturdy bass and ‘acid!’ exclamations, being gutsy enough to work in a protein bar commercial. Of different breed is “Anopolis 17” with a relaxing flow of Warp-style intelligent sound.