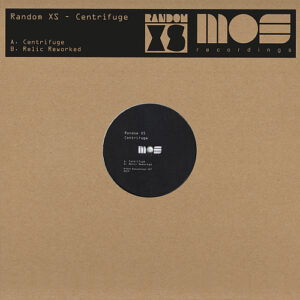 Random XS, one of Djax’s cult acts, was spreading acid techno bacteria up to the mid-1990s when they closed a short but prolific period with their only album “Braincloud”. Thereafter the group members pursued other projects until a comeback in 2015 with two long journeys on Shipwrec.

This year a valuable reissue of “Give Your Body” emerged, where the classic tune’s notorious out-of-sync gap at eight minutes was fixed, but this minor detail was not the reason why the record was really worth the money. Instead of an identical new edition, the original was upgraded by mind blowing remixes from Delta Funktionen and Lost Trax.

Now Random XS have excavated another two cuts from the early 1990s and pressed them in black and red vinyl, to smash the floor the old school way. With “Centrifuge” they have wrung out a physically demanding track with evil drum patterns in caustic mist, while “Relic Reworked”, sounds like a calmer version of “An Acid Relic” from “Frantic Formula EP”. Would love to see this twelve as an appetiser for further hidden treasures from Random XS.