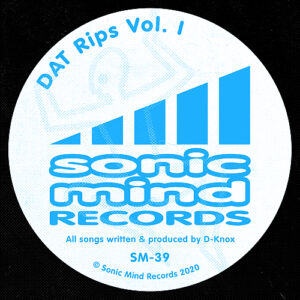 In the 1990s Northern America, besides Detroit or New York techno rebels were spotted in Kalamazoo, a town of 75,000 in the state of Michigan. As the cradle of Black Nation Records and its artist roster consisting of Jay Denham (aka Vice, Fade To Black) , Chance McDermott, Fanon Flowers, Donnell Knox (aka D-Knox) and others, the location has to belong to the trajectory of electronic music pilgrims travelling in the US.

Speaking of D-Knox: without any major interruption, the artist and his Sonic Mind label have been in business since 1995, proudly carrying the torch that was once lit in Kalamazoo. D-Knox’s digital-only library material “DAT Rips Vol. 1” offers time capsule entertainment, starting with blazing “DAT Rip 01”. Fast-paced how Black Nation used to have it, the track’s charm lies largely in the artist’s narration – not for the first time – when he tells about the roots and beloved neighbourhood. After a heavy hitter with ethereal flair, “DAT Rip 03” pairs filthy bass drum and electric acid, while the last cut reinstates the 140 BPM regime with steely techno funk.

Sonic Mind is on fire for sure, when only recently D-Knox, collaborating with Mark Hawkins (Marquis Hawkes), hailed his home base in “Kalamazoo EP”. Whether new or old, tracks from D-Knox can be called ‘relentless’, when they are kicking off the techno year in style.