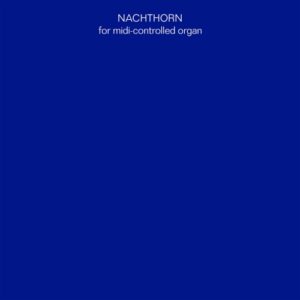 With determination and courage, Maxime Denuc set up a challenge between computer and organ. More exactly, in May 2021 the musician from Belgium steered electronically the organ in the St. Antonius-Kirche in Düsseldorf. Offering various forms of modern classical with an urban twist, “Nachthorn” would not sound out of place either at a midnight mass or at club nights.

After tuning the organ with contemplative dronescape (“Edo”), Denuc immediately drops the album’s highlight “Infinite End”, a hosanna to the immortals with joyful chords performing a broken rhythm waltzer. Vibrating timbres provide a foggy view over the church’s hometown (“Düsseldorf”), with dub techno undercurrents akin to Vainqueur’s elevations, while spaced out loops of ”Agoraphobia” lead the imagination to lost tapes of Transmat jams.

The B-side has its own “Ouverture”, producing atmospheric drive that quite a few 1990s trance producers would admire, while loop-based “Function Music” reapproaches dub-flavored spheres. The twirling motives of “Papillons” perfectly fit the title, for observing the springtime butterflies chasing each other, and the buzz of minuscule life in the shadowy corners of nature (“Fat Old Sun”) concludes the album, among the absolute best of 2022.