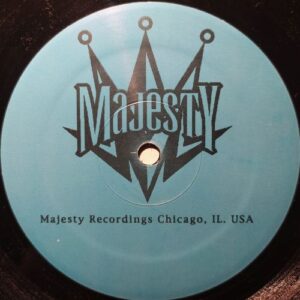 Mike Dearborn hails from the birthplace of house and debuted on Muzique Records in 1991. Soon he landed on Djax-Up-Beats, along with several other Chicago producers, and become a regular contributor to the label’s catalogue. Dearborn had a vital role in shaping the sound of Djax, with tracks like “Razorsharp”, “Move”, etc. After the European circuit, in 1997 he launched Majesty Recordings in his home town.  “Feel The Rush” was the label’s second EP with three powerful tracks from analog workshop of Mr Dearborn, under the Crimson alias.

The title cut is built on stripped down percussive charge, like capturing Green Velvet’s most adorable moments, before an etching bass line starts the final push to the catharsis of this nine-minute beast. Upbeat mood continues in “Burner” that goes deeper down in the basement with a snare inferno and punching bass line. The bass remains as bold in the last track (“On The Mend”), for insomniac nights of worshipping 909 driven rhythms and buzzing effects.

Though Dearborn’s producer days seem to lie behind, as of now, he has remained busy as DJ, when looking at his social media updates. Being an acclaimed producer since the early nineties, Dearborn definitely deserves a longer story than this blog snippet.