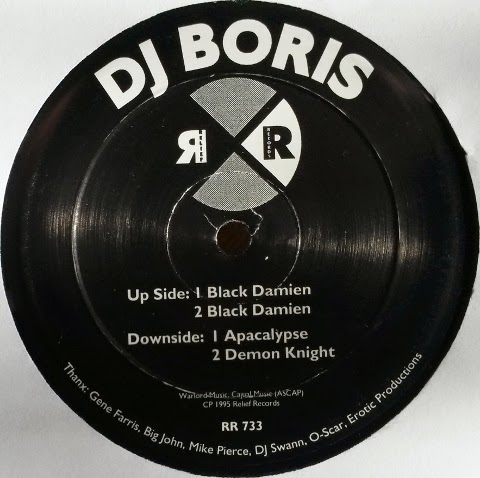 It was the autumn of 1995 when I spent my two-month vinyl budget on “The Future Sound Of Chicago“, a triple pack documenting the resurgence of harder side Chicago, spearheaded by Green Velvet, Gemini and others. Previously guided by DJ Jokke’s (FI) thematic mini mix, I was very convinced the new raw sound from Chicago is the event of the year. “The Future Sound Of Chicago” itself deserves a closer look but I would like to focus on the artist behind the weirdest track on the comp.

It was DJ Boris aka Jerome Baker, a Chicago native, whose bone-dry funk blew my mind. At first instance it’s a genuine dirt cheap production based on a limited number of drum patterns. However it’s something that can be described as tracky, and crazy.

Two versions of the title track consist of minimalist riffs and mind-numbing repetition, which lend a certain appeal to the tool. “Apacalypse” sees some tempo changes and howling noises, which make it the most animated tune while “Demon Knight” is closer to the mid-90s pumping Relief fare backed by demolishing bass.

Even if the sleeve is worn out and the sound crackles, it’s a special feeling to spin a Relief record, in this occasion a very underrated tool in my view. “Black Damien” remained Baker’s only EP under the DJ Boris guise. In 2006 he made a return with a few releases on Relief and other labels.