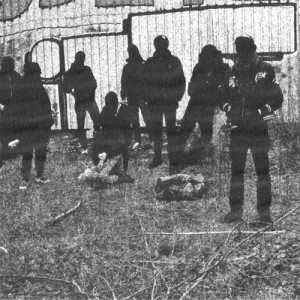 ZCKR Records is an independent label from Bremen, a city in Northern Germany and the smallest Bundesland. Historically, Bremen is known for its fairy-tale Town Musicians, four animals who formed a band and scared off a thief with dissonant, shrill improvisations. No need to be afraid of ZCKR, although the label and its artists are keen to explore the wilder side of (electronic) music.

Diversity is the tagline throughout 11 tracks that take off with 37 seconds of sheer noise by NorÐurgata and a luminescent IDM jam by another newcomer Tal (“Static”). Steely tech-funk in PreciousPandaExperience’s “Fragile” recalls techno bastions like Sativae or Perc Trax, and after Shepard Tone’s nocturnal noise experiments in “Machine In The Ghost”, Spröde Lippen’s melancholy invites to a lonely heart bar (“Einstellungen”). Adel Akram, one of the label’s curators, rounds up the A-side with a straight techno loop.

Breaklab introduces the B-side with a beatless mashup of drones and industrial (“23 Tracks”) and in similar experimental vein are “01-4A / Bremen-Delhi” by Abstract Pictures, HSV’s wall of noise “Kind Of Blue”, which could be a peculiar tribute to Hamburg’s foremost football club, and a more streamlined attempt, glitchy “Sanctuary” by Robin. However, the compilation’s best cut comes from the Drowned Records artist Tobs, who shows floor qualities in breakbeat-ish “HB Hardcore” and loops the rave age sample “U make me feel so good)”.

The vinyl designed by Sebastian Reuschel and mastered by Stefan Betke aka Pole, comes with a download card.

The story of grey

Bremen’s maritime climate and also the mood in the local electronic music scene explains the ‘grey’ aspect, told to Terminal 313 the label owner Sebastian Reuschel, who appears as Abstract Pictures in the compilation.

“Only a handful of people are trying to make something different [in the music scene] and it’s very hard to work here, to do your thing and not lose your motivation. That all describes our grey city”, Reuschel says. “We had the idea of a ‘big’ sampler with lot of people we know and we invited to draw a musical picture of all that. A snapshot of the moment, to open doors and trying to create something like an impulse”.

According to Reuschel, the selected artists are a mix of newcomers and more experienced ones, who had to have a link to the city. Although Qnete is missing in the sampler, Reuschel has some good news about the Bremen upstart: His track “Grey City Anthem”, too late and too long (about 11 minutes) for the sampler, will be released separately on ZCKR in the near future.