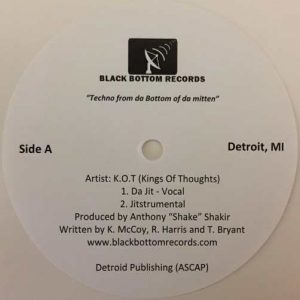 As everyone would guess, Detroit’s electro and bass label Black Bottom Records got its name from the area located on the city’s east side that was named Black Bottom by French settlers because of its fertile and dark soil. For the label, the ground has not been too fertile because it has issued only two, though extremely sought-after records by the group called K.O.T.

Now it’s reissue time when “Da Jit EP” is compiling K.O.T.’s tracks from the EPs, written by Messrs McCoy, Harris and Bryant with a notable addition of Shakir, Anthony ‘Shake’ who has been credited as the producer of recordings in Metroplex Studios.

After released digitally first, the vinyl version helps to spread original techno bass from the Motor City. All four tracks are an amalgamation of heavy scratching, immense bass and Kraftwerk samples, in the best manner carried out in the booming “Jitstrumental”. Two digital-only tracks fully deserve a Parental Advisory label because of the rapping going not surprisingly to one direction with ‘pu**y’, ‘a**’ and ‘di*k’.