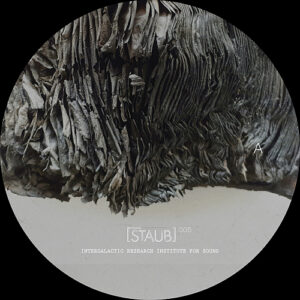 It would be pure guessing who would take responsibility for “STAUB005” as it’s credited only to unknown artists. The fifth of STAUB mini compilations is again curated by Berlin’s event series of the same name, which tends to practice blind-date nights in the sense of not releasing any advance line-ups. The release brought out by Intergalactic Research Institute For Sound (IRIS) clings to the same STAUB principle by not disclosing whether the tracks are written by much-coveted performers or new kids on the controls.

The curtain is raised with a semi-stepper from industrial zone that doesn’t predict the following worship of acid gods with biting 303 lines, the A2 cut recalling the 90’s post-hardtrance era. Pure hypnosis is delivered by valiant bass line and rattling snares of B1, the EP’s standout track that may have resulted from Uwe Schmidt’s visit to the house of Djax. Infected with robotic lyrics, the B2 track hits with a furious melt of broken beats and EBM and the fun is topped up with four locked grooves. “STAUB005” is an overly functional tool that offers plenty of ammunition for the floor.